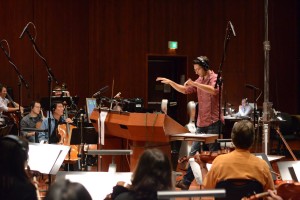 As a writer, Philip has collaborated with some of the finest composers working in film and TV, including Harry Gregson-Williams, Carter Burwell, Alex Heffes and Fil Eisler. He’s has had the honor of orchestrating for James Newton Howard, Alexandre Desplat, Ludwig Göransson, Richard Harvey, Steve Jablonsky, David Buckley, Stewart Copeland, Peter Golub, John Frizzell and several other amazing artists. Philip has stood in front of orchestras as a conductor in Hollywood, Nashville, New Zealand, Prague and Bulgaria.

After a steady diet of drum corps and classical music throughout his childhood, Philip’s formal music education took him to Chicago where he studied trumpet and composition at Northwestern University. This classical foundation combined with a deep understanding of modern scoring techniques allow him to seamlessly compliment every project he works on. Selected as one of six fellows for the 2011 Sundance Institute’s Film Composing Lab in Utah, Philip has always had a deep love for the interaction of music and film. He owes much of his success to his mentors in Hollywood, Harry Gregson-Williams, Alan Silvestri, Penka Kouneva and Peter Golub. Philip maintains a studio in Altadena, he is represented by Andrew Zack at the Gorfaine-Schwartz Agency.